During the slower periods of ad spend, the Adapex team is focused on the ad tech details that help drive revenue for our clients.  Viewability is a big one, as it directly correlates to CPM.  Being able to optimize viewability will increase your CPMs.  We’ve talked about viewability in previous blog posts, but it’s worth revisiting.  Plus, a reminder of available Google tools that help measure and improve viewability.

Viewability is a metric used in digital advertising to track impressions that are actually seen or viewed by users.

Google has created Active View metrics in compliance with industry standards for measuring the viewability of online ads, as developed by the Media Rating Council.   When an ad appears in a location that is measurable by Active View, its viewability statistics are recorded in the Google Ads account.

Here are the key metrics to understand:

There are several things you can do to improve viewability on your site. The best placements with the highest viewability ratings are right above the fold (ATF), sticky footers, and sliding sidebar slots.  Whereas ad placements at the very top of the page generally get scrolled through by the user as the page loads and deliver a lower viewability rating. 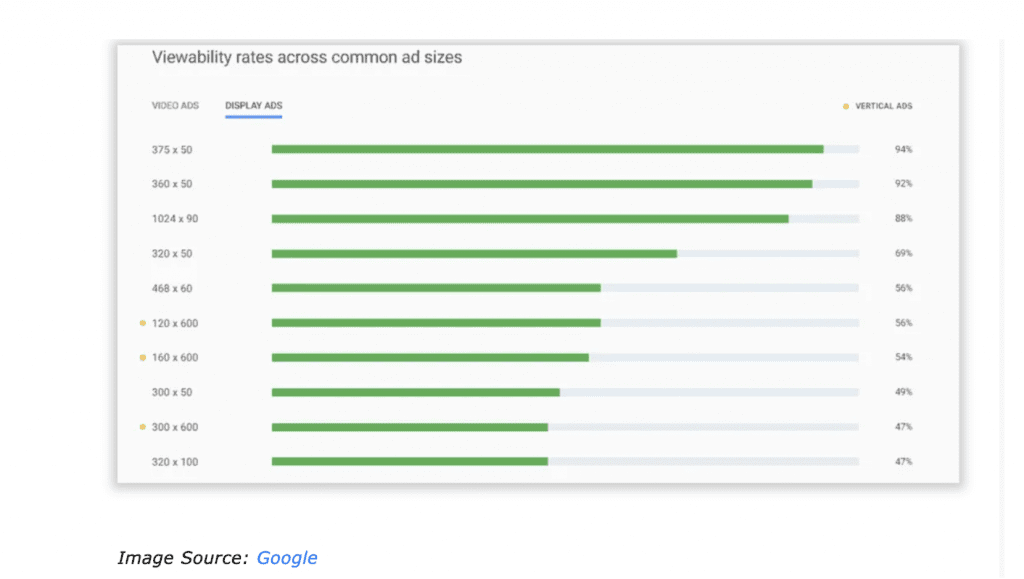 Utilize reports in GAM to identify where you may need to optimize placements or ad sizes. The non-viewable impressions reasons report shows how often a given ad unit has not been viewable for each of the following cases:

If you’re not sure how to improve the viewability on your site, Adapex can help.  We can do a free site audit and identify where you can improve to keep you on top of the CPM curve.

To stay on top on industry trends follow us on LinkedIn

For years, Adapex has been our trusted partner — their experts are always there for us and feel like a part of our team. I have confidence that their techniques and products will keep our revenues growing strong. Highly recommend!

Working with Debra and her team has helped our monetization strategy tremendously.  We have a great relationship with Adapex, working together to maximize monetization, identify new incremental revenue opportunities and improve overall ad performance.  Adapex is very easy to work with, responsive and proactive…their technical team is always ready to work with our development team to ensure seamless integration.

We couldn’t find a better partner to work with.

We’ve been working with Adapex for a while and they consistently offer great support and present new opportunities to generate more revenue every month.

The entire Adapex team has quickly become key players in our overall revenue optimization strategy. They’re fast, responsive, proactive, and most importantly good at what they do. I am beyond happy I made the decision to make the change to Adapex.

“Adapex more than doubled our programmatic revenue year-over-year. This fact speaks for itself; what I would like to call out is the exceptional level of attention and support that they provide to their clients. It would be a true challenge to find a more responsive or knowledgeable team anywhere in the industry.”